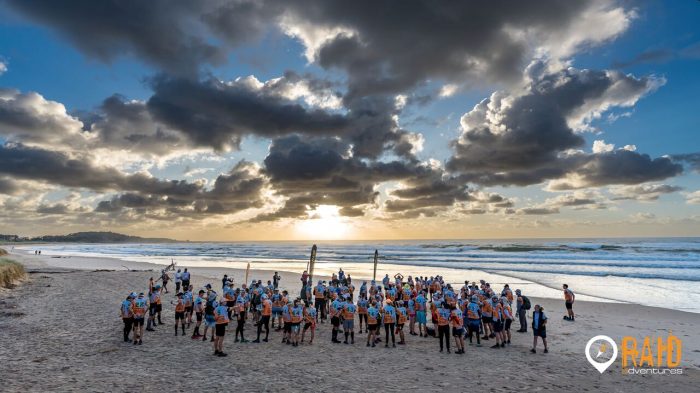 After almost 100 hours of challenging and technical adventure racing, team Thought Sports crossed the finish line to discover they were the winners of the second edition of the Raid 100. The Raid 100 is the world’s only rogaine-format, expedition-length adventure race. Teams raced over a 640km course through the Clarence Valley region of northern New South Wales via a series of stages of mountain biking, kayaking and trekking. Tasked with navigating an unmarked course with map and compass, teams competed to collect the highest score possible from the total 100 check points available on the course.

As current leaders in the Adventure 1 Australian series and former Australian national title holders, Thought Sports entered the event as one of the pre-race favourites. They didn’t have it all their own way early on in the race, however, finishing the first stage back in seventh place after electing to drop a couple of early check points. This stage was an extensive kayak and trek leg throughout the coastal regions of Yamba and Iluka, with highlights including remote beaches, scrambling around rocky headlands and tidal estuaries which really tested teams strategic kayak route choice. Amazingly, no two teams opted for the same route. Teams Chipesti and Tri Adventure Mountain Designs claimed the early lead collecting all controls up until the end of the second stage which involved a mountain bike leg through rolling farmland and bordering forestry.

The race then transferred to stage three with a long run leg through the impressive granite features of Washpool and Gibraltar Range National Parks. Strategic route choices started to come into play with only team Chipesti pushing to collect all the check points on offer.  Interestingly, Thought Sports elected to drop more controls but had forged into the lead if points per hour were taken into consideration. The question remained though – had they left themselves too short on points, or was the course to prove too big for any team to conquer in full with teams trying to collect every check point not leaving themselves enough time for big value controls towards the end of the race.

Descending from the high granite plateau, teams made their way by mountain bike along the Old Glen Innes road that traversed the Boyd River, with highlights including a historic tunnel cut by hand in the 1800s, an abseil into the river and a novelty check point located 30 meters high in a pine tree. As the longest ride in the race at 120km, teams needed to dig deep through the second night of racing.

Stage 5 was to prove the crux of the race – a massive packraft stage down the Nymboida River and into the neighbouring Ramornie National Park.  Teams were expected to be out on this one stage for over 24 hours. The technical nature of the packraft paddling and big water flows found many a team ejected from their rafts making for tense moments. The top teams took it all in their stride and it was on the third night of racing that big changes were seen on the leaderboard. After pushing hard the whole race, the pace possibly caught up with Chipesti who had to withdraw with an injury to a team member. Meanwhile, team Astrolabe had paced themselves well with great strategy, making their move on this stage and the subsequent stage 6 mountain bike and trek leg. Indeed, upon completion of these stages they had moved to just within a single point of team Tri Adventure Mountain Designs in a battle for a second and third place.

Team Thought Sports used the additional time they had banked by dropping early check points to great effect, managing to collect a healthy swag of points on stage 5 which catapulted them into first place after the withdrawal of Chipesti.  And with just a 48km paddle down the Clarence River to the finish line on the last morning of racing, it was a position they would not relinquish, crossing the line after more than 99 hours of racing with a score of 601 out of a possible 650 points. Incredibly, after more than 4 days on the course only a single point separated teams Tri Adventure Mountain Designs (550 points) and Astrolabe (549 points), with the former claiming a well deserved second place.  The results solidified Thought Sports as the number one team in the A1 National Series this year, bringing them one step closer to the coveted prize of a GODZone entry.  Astrolabe’s impressive come from behind result will also see them move onto the podium to join team Tiger Adventure A1 (fifth in the Raid 100) on the national leaderboard.

In the other competitive categories, there were a number of further impressive results. Teams had the option to race in pairs, an unusual exception for most big expedition races. Taking out the winning pairs team in sixth place overall was the experienced mixed duo of the BMX Bandits. Team Marginal Gains used their paddling prowess to work their way into ninth overall as winning all male pair, an impressive result for the expedition race rookies. The Raid 100 welcomed back teams from New Zealand for the first time since the outbreak of the pandemic, with team Fuse Creative justifying the trip across the ditch to win the all female pairs category.

With its unique rogaine format, teams were continuously kept on their toes, needing to make strategic decisions at every turn while still executing precise navigation. The format means that no team knows quite where they stand on the leaderboard at any given time and have to push the whole race, yet are constantly crossing paths with all the other teams on course. The Clarence Valley with it’s amazing river systems and varied landscape formed the perfect backdrop for the race. A full replay of the race including tracking, photo gallery, team reports and leaderboard can be found on the live site here.  The race will return to it’s regular 24 hour format in April, 2023 with planning for another special 100 hour edition in 2025.