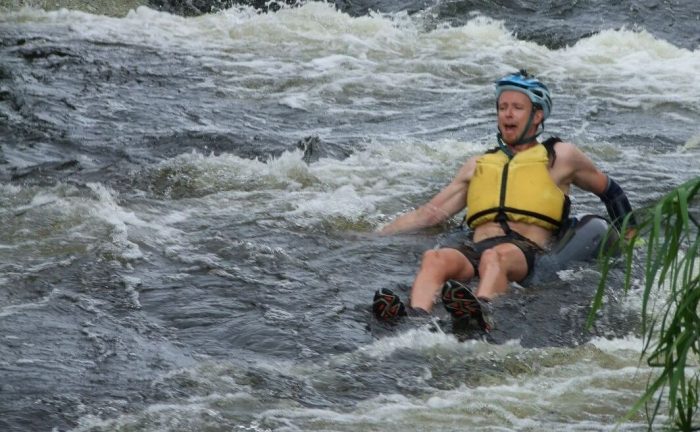 Note that this article was first published 14 December 2011 at Rogue Adventure.

Under the banner of Rogue, we’ve organised a number of our own adventure races in association with the Queensland Rogaine Association. These involve multiple legs of trekking, mountain biking and kayaking over a rogaine format, including both a 24 hour event and an 8 hour event in 2010. Keep a close eye on this site for news early in the new year about future events!

In the interim, reminisce about the past Rogue Adventuregaines, with the final report from our 24 hour event below. A multitude of pictures from the race can also be found at the following link, or just head to our photos page.

Congratulations to all those who took on the challenge of the Rogue on the weekend. It was definitely a demanding course and any team that survived even as far as CP1 has put in an awesome effort.

It was great to see such a mix of adventure racers and rogainers out on the course – hopefully there will be more cross over between these two sports in the future as they can both provide so much to each other. We had the full gamut of teams from those just out for a solid training hit out before XPD, to those looking to extend their boundaries from shorter adventure races to a few daring souls taking on their first adventure race of any kind! You all should be proud of your efforts regardless of results.

As always, the leaders of the pack dominated the course. Taking out the overall title was SCAR with a score of 2960 from a possible 3350. Lead by the experienced navigational skills of Rob Gowland and powered by the raw enthusiasm of Dave Schloss “fresh” from a break-through win at the Bribie Island Multisport (and minus a set of rear brake pads for the entire race), these guys are looking strong for the upcoming XPD. They were pushed all the way by the familiar pairing of Sunshine Coast mates Russ Stringer and Shaun Lauder from RUSH, falling just 70 points short in second place overall. Third place in the mens was taken out by the brother pairing of Trevour and Daniel Pitt from Off The Map. Make sure to check out the minirogaine in 3 weeks time which is being organised by Trevour and which will sure to be a great event (and a walk in the park for all those who took on the Rogue).

Our mixed teams demonstrated how strong some of our female athletes are, taking out 3 of the top 6 places. Winning mixed team and in third place overall was Darren’s Delusions’ Darren Smith and Nina Wright. These guys cracked every leg of the Rogue and will be a force to be reckoned with at the inaugural Vanuatu Adventure Race in August. The second placed mixed team was Simon and Kelly Gerber from Whatever, followed closely by the experienced paring of Craig Bycroft and Louise Foulkes. Interestingly, both of these teams made the strategic decision to drop the majority of the tough night-time bike rogaine avoiding the worst of the hill climbs to give them more time on the last kayak leg with relatively easier paddle CPs – a strategy that seems to have paid off well.

In the female category, it was a matter of survival versus attrition, with the Outdoor Freedo’s Kerry Rolleyn and Virginia Mitchell out for the full 24 hours and 13 minutes to take out the women’s title.

Of course, an event such as the Rogue would not be possible without the tireless efforts of so many volunteers. I was amazed by how many people were willing to give up their time and sleep to assist over the weekend to allow the event to run so smoothly. There are too many to people to thank individually in this report (sponsors, control setters and collectors, TA volunteers) but just know that your efforts are truly appreciated. We have had many thanks from the racers which I would like to pass on to you.

Final results and split times are attached, and should be up on the website shortly. Keep an eye on the website in the coming week as we will also have photos from the course. I’m sure there are many tales from the race – I’ve heard of broken chains in the first 3 minutes of the ride, kayaks flipped in the rapids, navigational blunders that have added a little too much “adventure” – so please send in your reports and they will be posted online. There is a RACE HQ voucher from our sponsors for the best report.

Anyway, make sure to check out the QRA website for more great upcoming events and I hope to catch you at a race soon.