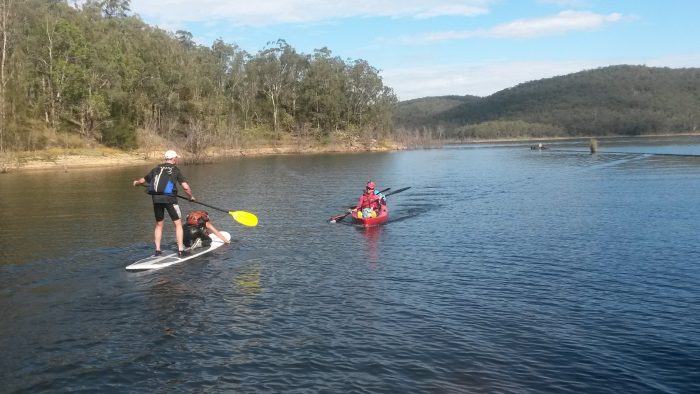 Note that this article was first published 4 May 2014 at Rogue Adventure.

So the Rogue is run and done, and it’s time for the traditional post-race wrap up.  Congratulations to all those who took on the course.  General consensus was that it was a tough but rewarding race.  Given the location, surrounding terrain and race HQ facilities, it was hard not to put on a good race.  Highlights include the trek down the gorge at the Valley of the Diamonds, some tricky off-trail navigation on text-book rogaining country, kayak legs on two different lakes, a beast of a bike leg over varied (and hilly) terrain and of course the novelty legs of archery and stand-up paddleboarding.

Full results have been posted on the race live site.  For a more in-depth analysis of results, make sure to head over the QRA results page for full leg splits and CP statistics.  There have been a number of minor changes due to navlight corrections.  A big thank you to Paul Guard for organising these.  After finishing as the second placed team in all four previous editions of The Rogue, team RUSH managed to finally break through for the win, crossing the finish line 20 point and 15 minutes ahead of second place Tiger Adventure Yellow Mens.  Third place was taken out by Tiger Adventure Vintage.  These three teams didn’t have it all their own way though, with the lead changing multiple times throughout the race along with Mass Nutrion Noosa who deserve an honourable mention in fourth place.

Mixed teams made a strong showing, taking out the next four places on the leaderboard.  A number of different strategies were adopted by these teams.  Calories elected to drop a couple of CPs early on, and were subsequently running behind on points per stage early in the race, but well ahead on time and ultimately points/hour.  However, it was team Tiger Adventure Yellow Mixed who scrapped ahead at the finish line by 40 points, with the NSW pairing of Husband and Wife edging out Team Explore by 20 points for third place.  In the womens category, youth triumphed over experience this time around with the Tri Adventure Girls taking the title over Tri Adventure Vintage, after the early withdrawal of the Giddy Up Girls due to injury.

From a race organisers perspective, it was a very smooth event.  We had a number of minor injuries and withdrawals, but nothing requiring immediate medical assistance, which is always a relief.  The course was almost swept by the leaders except for one CP.  This would suggest that perhaps the course was a little short, as it means that the front running teams aren’t forced into making those decisions about which CPs to drop and which to collect.  To do this though, I would need to make the course about 25% bigger, which represents not only a ton of extra leg work, but also means that the course becomes overwhelmingly big for the middle and back-of-the-pack teams.  What then happens I find, is that numerous teams drop whole legs, missing out on some of the best bits of the course.  By way of example, in 2010 the winners collected about 75% of the CPs, but only 7 teams did the last kayak leg on a lake that took months of negotiation to get access for and was a personal highlight of the course.  I guess my challenge as an organiser is to set a course that pushes the top teams both physically and strategically while encouraging all teams to tour the best parts of the course.  Perhaps a 120 point CP just outside of the TA on every leg, or more 20 point CPs at the edge of the course?

All the photos from the race can be found on the live website, or here.  A number of teams have submitted race reports that are well worth the read which can also be found on the live website.  The thank you list from running a race of this magnitude is also long.  In the lead up to the race, I felt like I was swamped by the number of volunteer offers I had, but in the end it turned out that I needed every one of them for the event to run so smoothly.  A big thank you to Sally Staton, Paul Guard, Derek McKinnon, Darren Saunders, Erren Seiders, Jane Elby, Kym Alexander, Daniel Browning, Andrew Gills and Linda Wallis.  I’d also like to recognise our sponsors for the great swag at prize giving including Greg from ARea51, Alan from Ferno, Brett from Globe Trekker and David from Coconut Groove.

So as the dust settles on the 2014 race, it will soon be time to look towards 2015 and beyond.  I essentially have three 24hr courses mapped out in my mind that will take teams to areas in SE QLD that have never been used in an adventure race before.  One of these won’t be feasible for at least 18 months due to environmental reasons.  Of the other two, I would describe one course as more “adventure race-like”, that is, more linear elements, tougher but more spectacular terrain and possibly more physically challenging, while I’d describe the other course as more “rogaine-like”, that is, more navigational challenge, more strategic route choices, more off-trail travel and less accessibility.  Never fear, both will make excellent and rewarding courses, and the core element of ultimate route choice that characterises the Rogue Adventuregaines will always be there.  I’ve had my permits knocked back for one of the courses, and while I think there is strong grounds for appeal, the decision for which course to go with in 2015 may be made for me already. Given the growth in popularity of the race, I may also look to reintroduce the 8hr category despite the additional work load if course logistics permit it.

So while we wait on further news on the Rogue24, I’d encourage you to head on over to the QRA events page to see what other great races are up on offer.  Paul Guard is trying a twist on the 24hr rogaine format, our premier event of the year, removing the 8hr and 15hr categories to bolster the 24hr race, but offering up a special category based on points per hour for teams inclined to go hard and fast for a shorter period of time.  Of course, there is also the cyclegaine and 8hr and 12hr rogaines, plus a couple of metrogaine events including the Urban Rogue in December.  If you are unavailable to race these events, consider stepping in a volunteer role.  I’m sure the team from this year will attest to the fact that it can be a very rewarding experience.  Look forward to seeing you at a race soon – Liam.